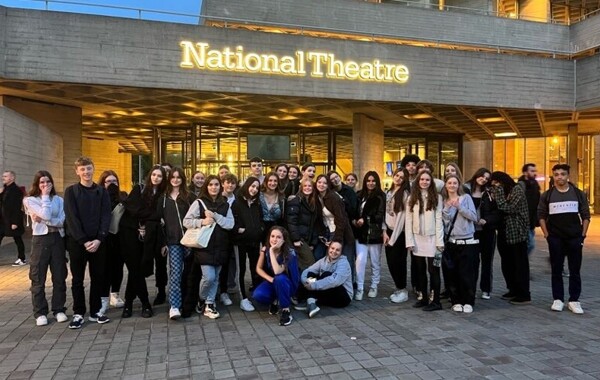 On 18th October, 32 GCSE Drama students took a coach into London to attend a performance of Arthur Miller’s ‘The Crucible’ at the National Theatre.

We were dropped off by the London Eye and took a walk along the Southbank to the theatre. The play is a dramatisation of the Salem witch trials, which happened in Massachusetts in 1692-3. Arthur Miller wrote the play as an allegory to McCarthyism in 1950s America, and direct parallels can be drawn between his own experiences being questioned by the House Committee for Un-American Activities and those of his character, John Proctor.

Upon entering the theatre, we were greeted by a simple stage holding a cloth covered alter with two golden candle sticks. This was placed on a raised platform with dark wooden floor boards, representing the Salem meeting house. A large water feature, representing rain, fell around the edges of the stage, and this device was used at the start and end of each act to signify the passing of time or change of location.

When reflecting on the performance, students said that the actor’s chosen to play Abigail and John Proctor were not how they imagined when reading the text, but were won over by their incredible acting. Also mentioned was how the actors made clever use of accent; blending regional American accents with regional European accents in order to communicate that the Puritans had only recently moved to America. Another thing the students found successful was having moments that are usually just described in the text physically acted out upstage of the main action. This included the girls dancing in the woods, which is normally only referenced.

The evening was incredibly enjoyable and will be hugely beneficial for the students as they approach their GCSE Drama exam, in which they need to write about how they would act, direct and design for the play.

Mrs A Rebbettes, Head of Drama

Written by Mrs A Rebbettes