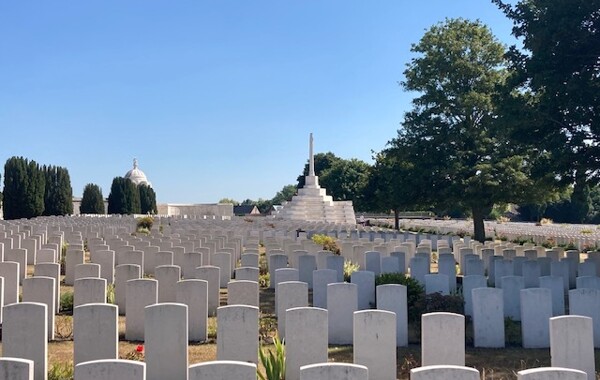 Earlier this week the History Department ran 2 trips to visit the Battlefields in Ypres, Belguim

Year 8 student Thea.S wrote this review of the trip:

As many parents/carers will know, a number of year 8 students have had the fantastic opportunity to go on a school trip to Belgium for 2 days, of which we have been able to experience the horrific scale of those who gave their lives in WW1. This was completed via a coach tour from England, through to France, and finally to Belgium. From cemeteries to indulgent Belgian Chocolate tasting - here’s what our History trip brought us:

To start with, the journey was taken via coach, until we reached the Euro Tunnel, where our coach was parked in the Euro Tunnel’s vehicle’s train. The journey was unbelievably quick - just 35 minutes and we were in France! It wasn’t long before we reached Belgium, and stopped at the Sanctuary Wood Museum to have lunch. The museum was a place where you could see just the type of experience those soldiers had during The Great World War - we were even allowed to explore the trenches and tunnels that those very men fought in - I found it extremely cramped and dark even with a torch… We then headed off to the Tyne Cot Memorial, the largest British memorial in the world - I was shocked at the extent of the number of graves placed here - almost 12,000 - with 8,369 of them unidentified.

After travelling for around 15 minutes, we briefly visited the Langemark German Cemetery, and yet again experienced the sheer number of lives lost in WW1, with hundreds of black square plaques remembering German lives. Visiting the Memorial Museum Passchendaele, however, provided us with a different approach to our learning. Here we learnt about the lifestyle of soldiers in the trenches: the medical care, the food they ate, and the artillery they used. There were some trenches here as well, a similar layout to the Sanctuary Wood Museum. I found this museum very informative and interesting.

As the sun faded into an evening light, we finished the day off with a filling dinner and a ceremony at the Menin Gate. This ceremony has taken place every evening at 20:00 since the 2nd of July 1928, it serves to remember those who fought in the war. This was followed by a trip to the local Belgium Chocolate shop, before heading off to bed. The next day, we set off to the Vimy Ridge, a Canadian warsite filled with huge bomb and mine craters, surrounded by masses of forest - again showing the awful number of lives lost. We later found out that every tree planted represented a Canadian death in the trenches. I personally found this tour particularly interesting, yet harrowing, as we were shown around the tunnels below and found out that they were actually carved out by hand - miners using their fingernails as digging tools in order to keep as quiet as possible. These were used to keep military lives safe and protect runners from getting killed while carrying messages to places. The tunnels lead to the trenches outside, with the Canadian offensive line just a couple of metres away from the German defence line. Finishing off that tour, we headed to Newfoundland Park, another Canadian remembrance site, where we had lunch.

After lunch, we visited Thiepval, a cemetery with names of fallen soldiers on every wall. Personally, this site hit me hard - the list of missing soldiers was never-ending, showing the true impact of war. We finished our trip at the Devonshire Cemetery, a small gravesite with a sad story behind it - lack of faith in British troops resulted in more lives being unnecessarily lost.

With this amazing experience behind us, we headed home with great pride of what our country has done to preserve our culture. No one could have prepared us for the impact of the Great World War and the heart-wrenching number of lives lost over the course of just 4 years. A big thank you to all of the teachers who gave up their time to support us on this trip.